CONCORD – Today Chessy Prout endorsed Marsy’s Law for New Hampshire, a constitutional amendment campaign to establish equal rights for crime victims. Chessy is a sexual assault survivor and advocate who will be discussing her newly published book, I Have the Right to: A High School Survivor’s Story of Sexual Assault, Justice, and Hope at Gibson’s Bookstore in Concord today at 2:00 p.m.

“Victims of crime should have the right to the same basic protections as those who victimize them. No rapist should have more rights than their victim. I’m proud to stand with survivors in support of Marsy’s Law for New Hampshire,” says Chessy Prout. 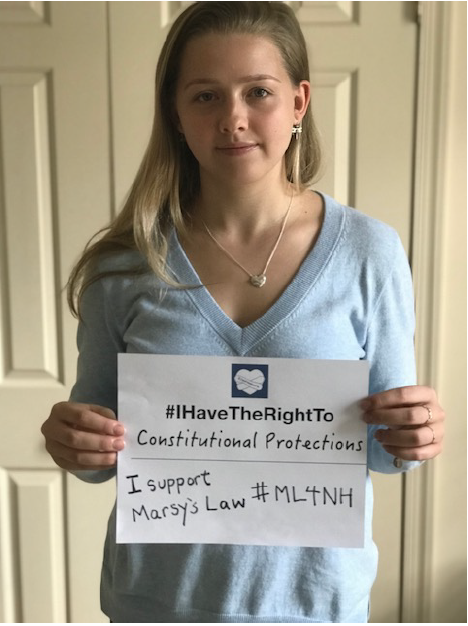 Chessy Prout is a high school sexual assault survivor. Raised in Japan, Chessy matriculated to St. Paul’s School—a boarding school in New Hampshire, where her father and sister attended. There, as a freshman, Chessy was the victim of a sexual assault. Chessy’s case and eventual trial garnered national and international media attention, as her assault was part of a ritual competition at the school called the “Senior Salute.” Two years later, in Chessy’s pursuit for justice, she decided to step forward publicly in August 2016 and launched the #IHaveTheRightTo initiative with the organization PAVE, for which she is an ambassador. In this initiative, Chessy empowers and encourages survivors and others to assert their most important, basic rights, and uses her voice to let other survivors know that they are not alone.

About Marsy’s Law for New Hampshire:

Marsy’s Law for New Hampshire is a grassroots effort to bring constitutional rights to victims of crime. Under Marsy’s Law, or CACR 22, crime victims would have the right to notification of all proceedings and would be guaranteed the right to be heard in the criminal justice system. Victims would also have the right to have input on all plea deals for offenders as well as the right to restitution resulting from the financial impact of the crime. New Hampshire is 1 of only 15 states that does not have constitutional rights for victims.

The Marsy’s Law movement began in 1983 by Henry Nicholas, whose sister Marsy was killed by her ex-boyfriend. One week after her murder, Marsy’s mother and Henry walked into a grocery store where they saw the accused murderer. The family had no idea that he had been released on bail. In an effort to honor his sister, Dr. Henry Nicholas has made it his mission in life to help provide victims and their families across the country with constitutional protections and equal rights.